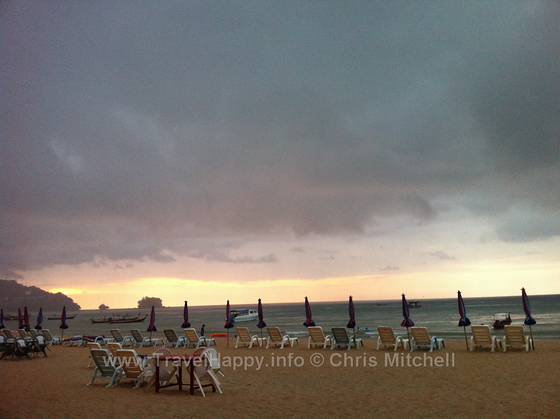 Most overnight stays in an airport hotel are fairly dreary. Usually the options are stay within the airport itself at some quite posh but also very expensive hotel – like Bangkok Airport’s Novotel Suvarnabhumi hotel or Singapore’s Crowne Plaza – or stay nearby in some cheaper but less salubrious abode, like the majority of hotels near Bangkok Airport.

Phuket, however, is different. A mere 10 minutes drive from Phuket international airport is Nai Yang beach, a picturesque if now somewhat overdeveloped sweep of sand that has plenty of seaview restaurants vying for your trade. There’s also a wide arrange of accommodation here, and a taxi ride which you can prebook from any hotel costs 200 Baht for the car (not per person). The same journey would cost you 50 Baht in Bangkok, but in Phuket, 200 Baht to get anywhere by taxi is pretty much a bargain.

After coming back from a Similan Islands dive trip, I stayed one night at Nai Yang Boutique Resort as we had an early start for our flight back to Bangkok the next day. As one of the cheaper options available in Nai Yang, I can definitely recommend it. The resort is built as a collection of bungalows, with 2 rooms to each bungalow, so you’re basically semi-detached. It’s all relatively new with high ceilings and glass sliding doors onto a small patio area overlooking a very well kept garden.

The garden is actually what probably makes this hotel – lots of other guests were sitting out on their patio enjoying the shade and the view. The room itself is clean with white walls and dark wood furniture along with a decent-sized, well maintained bathroom with shower and toilet. The minibar is surprisingly not outrageously overpriced and the large flat screen TV has a few western channels. The aircon unit is new and efficient. Wifi is allegedly available but not in all the rooms. For one night at 1000 baht, it was more than adequate, although we got lucky with a discounted price when we booked. Check current rates at Agoda. You can also see a useful map of Nai Yang with all accommodation options too.

Nai Yang beach is a 5 minute walk away, although you need to walk down a muddy, unpaved track outside the wall of the neighbouring, very posh Indigo Pearl resort to get there. Not so great when it’s dark after sunset and you want to walk back as it’s completely unlit, so bring a torch. You arrive on the road running parallel to the beach which has lots of restaurants, minimarts and the usual tourist flimflam. Walk through any restaurant to go directly onto the beach. There’s quite a few tables, sunloungers and umbrellas set up in the central section of the beach, but if you want some solitude you can wander either way following the beach around. All the restaurants are pretty similar in terms of the usual Thai dishes on offer, all priced around 150 to 200 baht, with a big bottle of beer a similar price.

Nai Yang is evidently a popular beach due to its close proximity to Phuket airport and appeals to the sun, sea and sand holiday crowd who want to convenience of not having to travel far. Even with the crowds and the inflated prices (by Thai standards), as a place for an airport overnight stopover, Nai Yang is hard to argue with.