If you spend any time in Thailand, there is plenty about this amazing and exasperating country that will leave you scratching your head. Long time Thailand expat Jerry Hopkins’ book Thailand Confidential is one of the best introductions to Thailand, providing entertaining and valuable insights that are easy to read too.

It’s hard to deny Thailand’s intrinsic charm has made it one of the world’s most popular tourist destinations. The kingdom’s magnetism pulls in more than 10 million visitors each year, with white westerners, aka farangs, making up a third of this figure with an average of around 10,000 arriving each day.

Along with the flow of tourists, businesspeople, and expats, comes the predictable assortment of guidebooks, cross-cultural advice, and phrase books, to help unwitting newbies navigate the complex physical and cultural environments.

While some titles like Culture Shock: Thailand attempt to provide a lens through which to make sense of the barrage of cultural idiosyncrasies, oftentimes they seem more adept at instilling a heightened state of paranoia. Readers can end up walking on eggshells after becoming overly concerned with the laundry list of cultural minutiae, which ultimately results in it taking them more time to feel comfortable in their new environment. 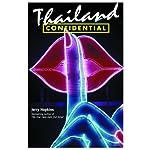 See all books by Jerry Hopkins at
Amazon.co.uk | Amazon.com

Essentially a collection of short essays – many were previously published in publications such as the Asia Times, Arena, and Asian Wall Street Journal – penned over the decade he has lived in Thailand, the book explores aspects of day to day life in the kingdom.

It’s worth mentioning here that while he may qualify as an expat author, Hopkins is a different breed from the more common rash of self-published novelists. He has authored 30 books – including No One Gets Out Of Here Alive, the biography he co-wrote on The Doors’ frontman Jim Morrison – and worked for as a correspondent and editor for Rolling Stone magazine for 20 years.

Thailand Confidential is not a treatise on how you should live in the kingdom, and Hopkins quickly dispels any idea that he is an expert on Thai culture.

"Like most new arrivals in Thailand, after being here for six months, I thought I knew everything there was to know. At the two-year mark, I was beginning to have some doubts, and now, after more than ten years, I realize I’ll probably never understand a damned thing about the place and its residents," he writes.

"That doesn’t mean I don’t sometimes pretend to know."

Hopkins provides a balanced account of how cultural intricacies and their contradictions play out in daily life through his own experiences of them. His writing is soft on egocentrism, so while he puts himself in many of the stories the focus remains on the topic of discussion, not on the writer.

Outside of the first person accounts are some historical or sociological pieces that help provide a base from which to understand wider social phenomena.

At times Hopkins does offers advice, particularly on the importance of being jai yen, or keeping a cool head, but he successfully dodges sounding like an old hippy holding court.

Divided into seven sections – Wild Thailand; Behind The Smiles; The Name Says It All; Acquired Tastes; Life Is Cheap, Mai Pen Rai; Funny Business; and Going Troppo – the 41 essays explore the animals and environment of Thailand, cuisine, crime and corruption, and music and culture, among other things. Inevitably the sex trade comes up, and this with other of Hopkins’ candid observations, might get some Thai readers’ backs up, nevertheless, most of what he says is pretty bang on, and touchy issues are dealt with sensitively.

" Thailand is called The Land of Smiles. I don’t intend to wipe the smile of Thailand’s face in the pages that follow. Only to take a look behind it. From a grumpy old farang’s point of view," he writes.

One of the best sections is Acquired Tastes, which takes a stroll through Thailand’s world class culinary culture, examines the use of ingredients such as rotten fish, gives and overview of the history of Thai ‘whiskey’, plus provides a humorous look at local aphrodisiac foods – which he freely admits only spurred his wife to utter "Ho hum" after rushing home from the restaurants.

Other chapters include Violence; The Hustlers, scam artists and touts who fleece tourists; It Didn’t Happen Because I Wasn’t There, corruption on ‘tea money’; Thailand’s Beer Wars, how Chang broke the Singha monopoly; Country Music, Country Style, a look a luek tung; and Greasing The Reels, which examines the growth of the local film industry.

One downside is as much of the book’s content is in the format of the original articles, so certain aspects, terms and phrases, are repeated, which is a bit annoying. However, if you just wish to dip into Thailand Confidential rather than read it cover to cover, this won’t matter much. Also, some of Hopkins’ articles are a little flat and some of the observations don’t seem to offer anything particularly new.

That being said, and taking an overall look at the content, Thailand Confidential offers up a collection of perceptive articles which help readers, new arrivals and established expats alike, to better understand some of the more confusing dynamics of daily life. Thai readers may learn something about their culture and country too, but perhaps its biggest strength here is to give insight into a wide range of well-balanced observations that other nationalities have of their country, both good and bad.

See all books by Jerry Hopkins at
Amazon.co.uk | Amazon.com