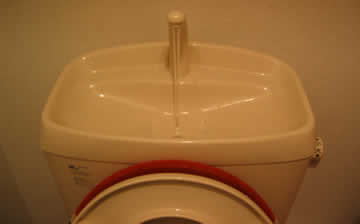 “Don’t expect too much from my apartment…it’s a glorified portapotty, basically”. So Lindy warned me in an email just before I arrived in Tokyo to visit her. This I could cope with – whether Lindy could stand being cooped up with me in her small but private space away from the madness of the city was another matter.

There’s no getting around it. Tokyo apartments are small, as befits one of the most expensive cities on earth where land is at an absolute premium. But what impressed me with Lindy’s apartment was the thought that had gone into using the space that it had.

Compared to most places in London I’d lived in, Lindy’s place was clean, modern and purpose-built, all qualities that made it a far more preferable residence. It came as part of the contract for her job teaching English in Japan. This impressed me enough to take some photos. So, then, with apologies to Eric Newby for the excruciating half-pun, I present a very short walk around a Tokyo apartment… 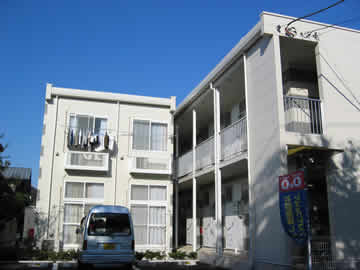 From the outside, the apartment block has that distinctly pre-fabricated look to it. Note the clothes hanging out the window to dry. Everyone does this because there are no gardens. 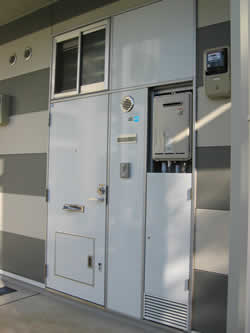 The front door which looks vaguely nautical and also distinctly un-door like. Every door along the landing is identical, which meant I almost walked into the neighbours’ house on several occasions. Normal keys are eschewed in favour of a shiny dog-tag-look-a-like piece of metal that slides and turns into a cylindrical lock. 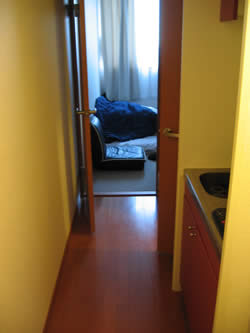 Once in through the door, the very narrow entry corridor doubles as the kitchen, with the cooking hob and sink over on the right. There’s a fridge and a washing machine in this corridor too, which aren’t in shot. Lindy is petite so she doesn’t notice the narrowness – as a big fat bloke, I do. This makes me realise just how slim built most Japanese are. You certainly wouldn’t catch a Sumo wrestler moving in here. 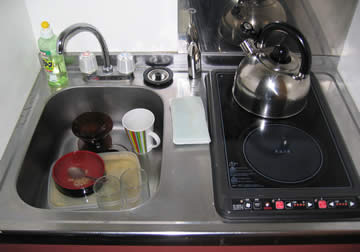 I should say something about this article having everything including the kitchen sink, but screw it. The two ring hob, complete with extractor fan, is controlled from that little button panel you see in the foreground. Note the authentic washing up in the sink to give that “lived in” feel. Whilst it’s a great hob, superhot and quick to warm up, cooking is a cramped experience, and you can’t escape that you are indeed standing in a corridor whilst you’re doing it.

The toilet, just off the corridor. Perhaps my favourite bit in the whole apartment. I’ve never seen this before. When you flush the toilet, the cistern refills by pumping the water through the tap on top of the toilet, so you can wash your hands as it refills. At first this confused my logic, making me think it was a bit unhygenic. But as the water being pumped through the tap is clean, and the water from your hands going back into the cistern will be flushed away again, it makes complete sense. Deeply clever. Now wash your hands. 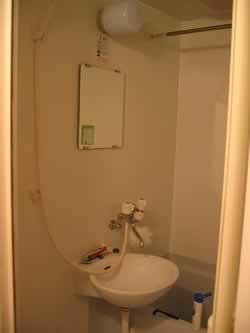 The shower room, just off the toilet. A louvre-style plastic door extends across to keep the water in. There’s a half-bath in there too, which is quite strange – you could be fully immersed but would have to be in a crouching position. Good for kids though. The shower runs off the same taps as the washsink, with a switch to flip between the water flow going to the tap or the showerhead. On numerous occasions I forgot the switch was on shower, went to wash my hands and wound up with the back of my t-shirt getting soaked. How we laughed. 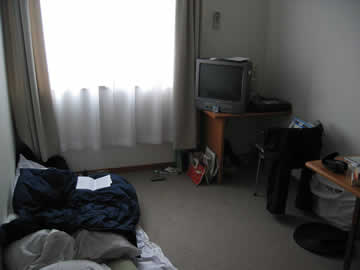 The lounge, at the end of the corridor. Lindy’s “Future Home-Maker Of America” credentials lie in ruins with the arrival of me and all my crap. The big pile of bedding to the left is our futons which I’ve expertly arranged into a sitting position. The writing desk in the corner doubles as the TV stand, and then on the right is a very small two person dining table. The apartment’s only window is a big one, looking out over some other apartments. 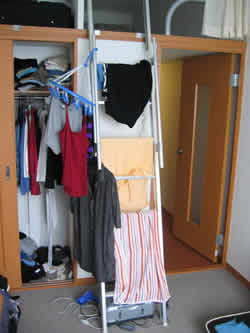 The ladder leads up to the sleeping area, and also doubles as a handy clothes horse. There’s a large cupboard behind it running off to the left. The corridor starts just on the right back out to the kitchen and front door. 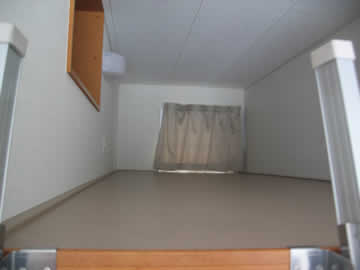 The view from the top of the ladder into the sleeping area. We wouldn’t both fit up here – not without one of us being suffocated up against a wall, anyway- and apparently it gets very hot up here even with the air conditioning on. Also looks a bit claustrophobic to my mind. The sleeping area extends back over and above the toilet and shower area.

And there you have it. The complete tour of a Tokyo apartment – compact and bijou, but clean, light and equipped with modern equipment to make the best of the limited space.

If you’re looking for some actual useful info about Tokyo, check out TrulyTokyo.com, an online guide written by my friend Chris Rowthorn. 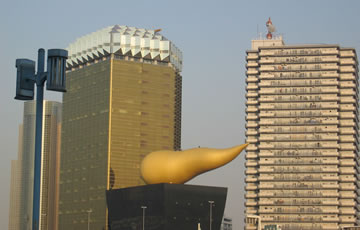 Finally, just to prove I really was in Tokyo, this is the Phillip Starck sculpture on top of the Asahi Brewing Company’s offices. It’s meant to represent the froth on a glass of beer, but it was promptly dubbed by the Japanese as “the golden turd”. Clearly they are a nation at one with the British in their sense of humour.