No woman should feel like it’s too daunting to go travelling, whether on her own or with others. Stephanie Elizondo Griest gives 10 tips from her new book 100 Places Every Woman Should Go to help turn those travel dreams into reality

Stephanie Elizondo Griest is the author of 100 Places Every Woman Should Go, a new guidebook that’s published in the next couple of days. She also wrote the deeply entertaining Around The Bloc about her travels in Communist countries which was published a couple of years ago. Both books have their own worthwhile websites – take a peek at aroundthebloc.com and placesforwomen.com.

Stephanie’s new book is designed to get women to go and see the world – on their own, in a group, with their partner, any which way. It’s similar in philosophy to my Seven Reasons To Go Travelling Solo article but paying particular attention to a woman’s perspective on travelling. I asked Stephanie if she’d put together some tips for women to go travelling as a complement to my Seven Reasons article – and she’s produced this list below which is, frankly, pure gold. Gentlemen, don’t be so short sighted as to stop reading at this point – you should be aware of all the following too, especially as you will win major brownie points for showing some consideration of these ten tips to the women you meet when travelling yourself. 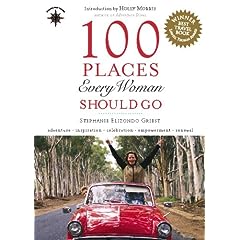 100 Places Every Woman Should Go

1. Networking
A month before your trip, send an email to everyone you know with your travel itinerary. You’ll probably be amazed at how many people have old friends / ex-lovers / third-cousins-twice-removed along your route. Ask for their contact information and arrange to meet them for coffee (or chai, or nargileh) when you arrive to get the scoop on their home turf. Also check in with other travelers by posting a note on Lonely Planet’s Thorn Tree Forum. Any burning questions you have will likely be answered within 24 hours (if not minutes) there, and you can find travel partners as well.

2. Packing
Take only what you can carry half a mile at a dead run. This is the golden rule of foreign correspondents and should be adopted by travelers as well. Lay out everything you think you’ll need, then pack half of it and double the money. A few things I never leave home without: a versatile pocket knife, a strong piece of nylon rope, a flashlight (or better yet, a headlamp), a combination padlock, a rain poncho, blank paper, pens, a journal, condoms, and a mountain of tampons. Which leads us to Tip No. 3.

3. Feminine Hygiene
A friend once traveled the developing world for nearly two years with a single device – a menstrual cup – and swears it is the greatest contribution to womankind. Simply insert it into your vagina and empty it a couple of times each day. No strings, no wings! Another friend eliminates her menses altogether by taking Depo-Provera, a shot of progestin that can prevent ovulation for intervals of up to three months. Otherwise, pack O.B.s or other non-applicator tampons, which take half the space of regular tampons and are less likely to be tampered with by customs agents searching for drugs. Chances are, you’ll be able to buy tampons abroad, but if you’re picky or have a heavy cycle (as in, only super-absorbency-plus will suffice) bring your own.

4. Money Storage
Some travelers sew little pockets on the insides of their clothes; others stash emergency bills and contact information in their bras or shoes. I advocate spreading the wealth. I usually keep a copy of my passport, a couple of traveler’s checks, and some money in a hidden waist belt, then store the critical documents (passport, airline tickets, credit cards, bulk of money and traveler’s checks) in a hidden thigh pouch. If theft is a serious problem in your destination, carry a decoy purse – that is, something to hand over in case of a robbery.

5. Male Repellent
Some women wear fake wedding bands and carry photos of hulky men they call husbands to ward off advances. I try to learn key phrases in the local language. (“I’m meeting my boyfriend here. He is a lieutenant in the U.S. Marine Corps,” is a useful one.) Public guilt/humiliation is the best way to deal with men who molest you on crowded buses or subways. Loudly and firmly, say: “How would you like it if someone treated your wife/daughter/sister like that?” or simply: “Shame on you!” Chances are, your fellow passengers will come to your rescue. (If you turn around and slug him, they likely will not.)

6. Safety
As a general rule, pensions, homestays, bed and breakfasts, and hostels are more “women friendly” than hotels or motels. If that is all that’s available, abide by the following: use only a first initial when checking in. Request a room that is not on the main floor. Take the elevator instead of the stairs. And never leave your key where someone can see your room number. 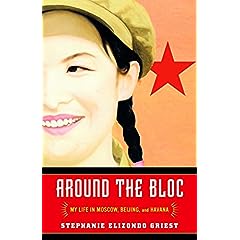 7. What To Wear
Conforming to local gender roles/social customs can be a challenge sometimes. While foreign women might be forgiven or excused for pushing the limits of local dress codes, it is simply disrespectful to wear tank tops and shorts in conservative or religious societies. Also beware that many cultures take fashion seriously: my mud brown corduroys and hiking boots made me look and feel like an androgynous pauper in Eastern Europe, and my ripped jeans were crudely inappropriate. Flip through magazines and rent contemporary movies from your destination and pack accordingly.

8. Staying healthy
Parasites just love to hitch hike. Keep them away by avoiding the following, especially in the developing world: salads and other raw vegetables, unpasteurized products like milk and yogurt, iced drinks, cold meat and cheese platters in Soviet-era hotels (where it’s probably been sitting out for hours, if not days), and shell fish. When choosing a restaurant, check out the bathroom first: if the Board of Health would condemn it, the same probably goes for the kitchen. Give your body time to adjust to local spices before hitting the street stalls, and only patron the busiest ones when you do. If you wind up somewhere even remotely sketchy, go vegetarian – or at the very least, avoid chicken and fish, as it goes bad fast. If you do get sick, drink Sprite and monitor your stool. If it turns yellow, bloody, or has pus in it, get to a doctor – fast.

9. Tears Work
While I hate to recommend that women rely on their perceived fragility or weakness to get by, there really is something about a lonesome foreign woman crying that magically opens the doors, wallets, and hearts of the people of this planet. It is how I got all of my stolen documents replaced one miserable day in Turkey in record time, without penalty or rush fees. It is how my friend Daphne evaded costly traffic violations across Africa and literally stopped a departing airplane in Angola. Use only as a last resort, but if you’re going to do it, go all the way. If seeking to avoid an exorbitant fine, jail, or getting thrown off the Trans-Siberian train in the middle of the night for not having your papers in order, think: Oscar. Drop to your knees. Convulse. Make such a scene, passersby get involved. If the situation is truly critical, consider fainting (but only if you’ve gotten enough sympathetic people involved that your oppressor can’t just toss your body off the train!).

Another strategy is pretending to get sick. I once read of an elderly expat in China who never left home without his doctor’s business card. Whenever his cabbies hit 80 miles per hour, he would hand it over with an ominous “If I have a heart attack, drop me off here.” The cabbies promptly screeched to a halt. Younger travelers may have a harder time pulling that off, but if your taxi really needs to slow down, shout: “I’m getting carsick!” and heave.

10. Return the Good Sister Karma
Spread the love. Be nice to female travelers you encounter at home, and help out your local sisters abroad. Support female artisans, vendors, tour guides, and taxi drivers wherever you wander. Your money will almost certainly go where it is needed most.