Phanom Rung is one of Thailand’s best preserved Angkor-era temples, and it’s well worth the effort to see it at sunrise 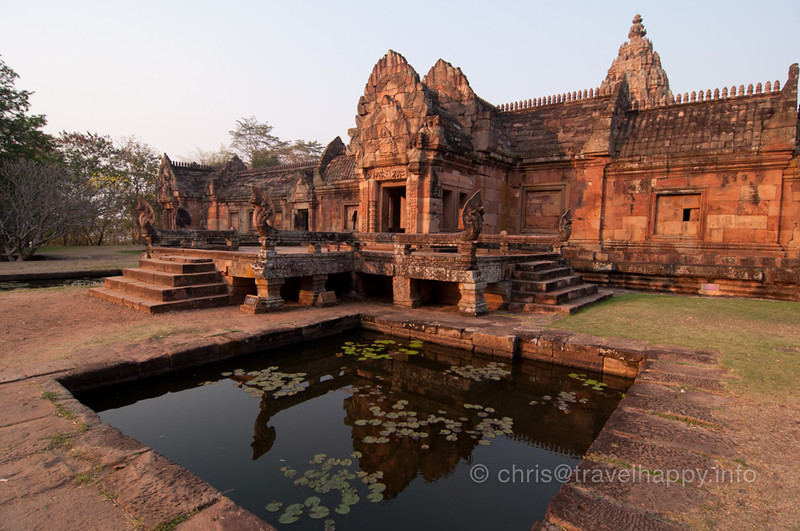 One of the first places I ever visited in Thailand – indeed, in South East Asia – was Phanom Rung temple, back in August 2003. It was my first experience of seeing Angkor-era temples and made me an instant Angkor history nerd. There is something about the grace and power of Angkor architecture that just really moves me and I’ve never really been able to explain it coherently to myself, let alone anyone else. While I have spent time in Myanmar’s Bagan and Thailand’s Sukhothai, the two other ancient empires that evolved and collapsed in overlapping centuries with Angkor, it’s always with these temples I find a strange fascination. (I wrote a quick guide to Angkor Wat too if you’re heading that way). 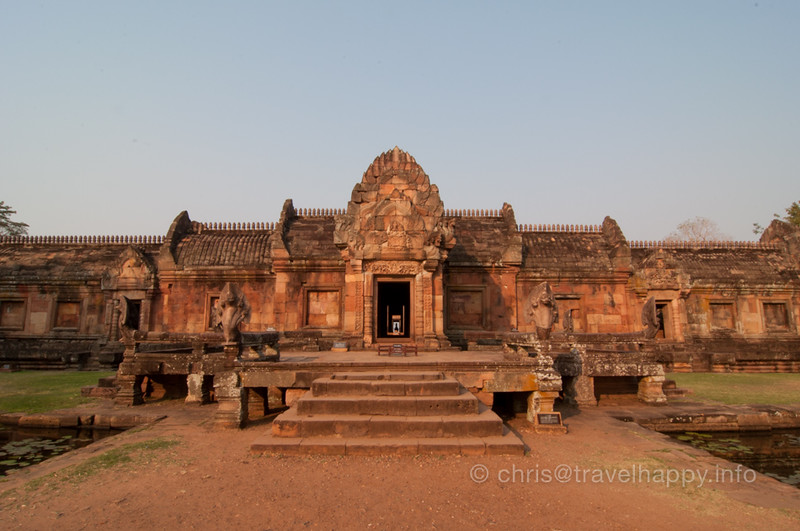 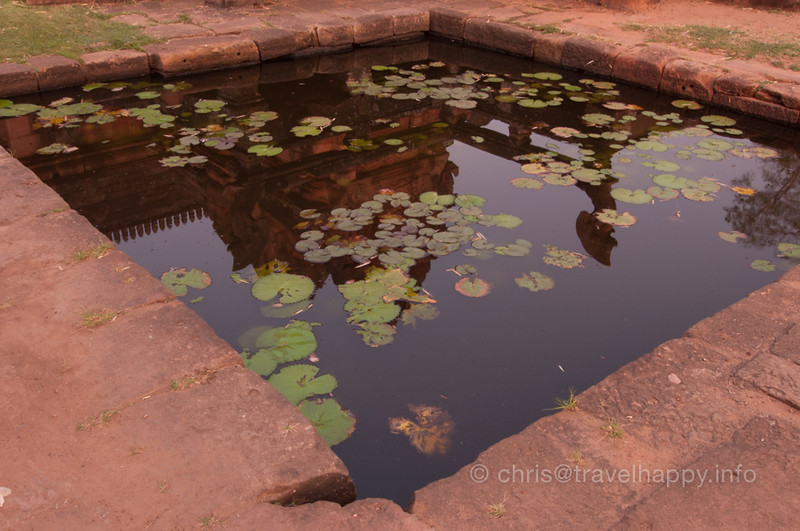 When I visited Phanom Rung in 2003 I was only there for an hour or so, walking around in the early afternoon sun gawping and taking some really, really bad photos. Phanom Rung had stayed in my mind ever since, so when my girlfriend and I attended a wedding in Ubon Ratchathani I wanted to go back but this time armed with a decent camera, a tripod and the iron will of getting up at stupid o’clock to get there for sunrise. 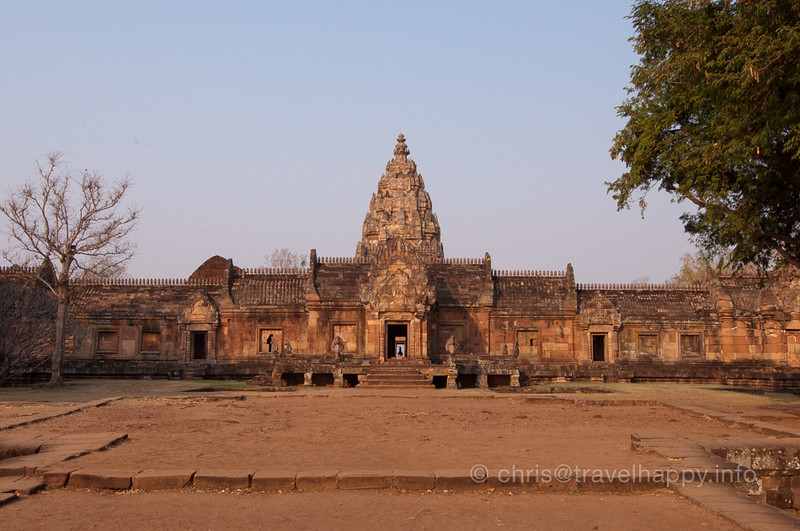 The other benefit of arriving there at five thirty in the morning was that we got there before anyone else. The temple was absolutely deserted. The sun had also decided to have a lie in and no decent light started to come over the ruins until a couple of hours later. No matter – having the entire temple complex to ourselves was just magical. As the sunlight warmed the stone, the intricate carvings within the temple’s inner sanctuary were revealed. Phanom Rung was built between the 10th to 13th centuries, and the carvings are part of temple’s dedication to Shiva as a Hindu shrine. 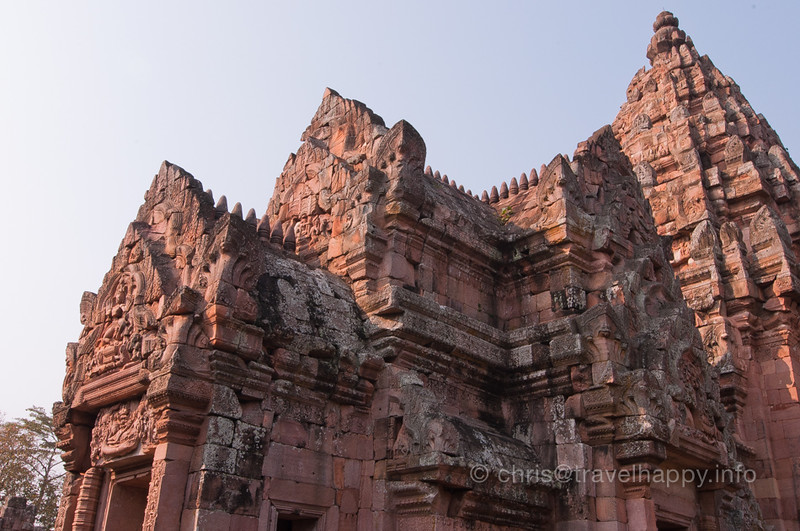 It was too dark when we first arrived to take photos of the spectacular approach to the temple, a long stone hewn road that drops into a valley and then rises up steep steps flanked by statues of naga, temple snake Guardians, until arriving at the top of the stairs the temple suddenly appears. The temple is actually built on the rim of an extinct volcano. I snapped these shots as we left, just as the first busloads of Thai schoolkids turned up for a school day out. I wondered how many of them would have their imagination sparked by the temple too. 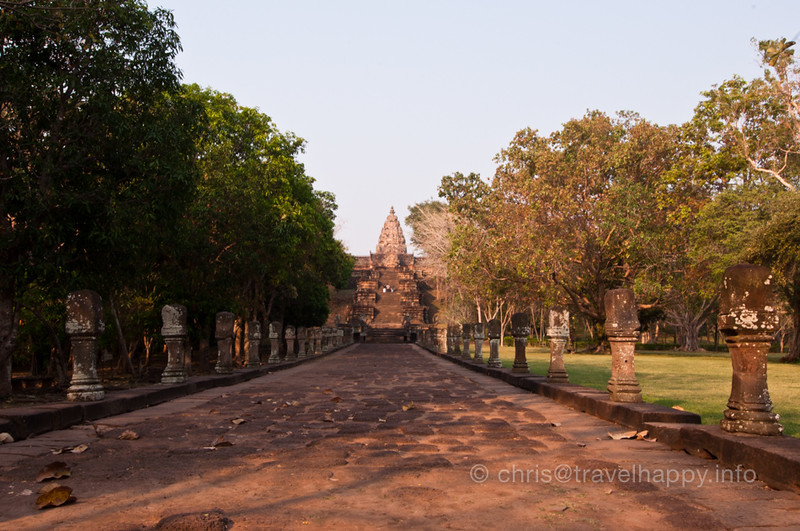 The Fine Arts Department Office of Archaeology has put together an excellent 15 minute video about Phanom Rung with English language narration if you want to see more of the temple. The Wikipedia page is also useful for the bare facts about Phanom Rung. The temple is still considered a holy spot, and ceremonies are conducted each year, mainly in April, when the rising sun’s rays shines straight through Phanom Rung from the Eastern entrance to the Western entrance through all 15 doorways of the temple.

The Phanom Rung Historical Park is in Buriram province, with the nearest city being Buriram. You can fly direct from Bangkok to Buriram with Nok Air (check Skyscanner for times and prices) and arrange a taxi ahead of time to drive you to the temple. (See this useful page on booking a taxi at BuriramExpats.com).

Staying a couple of nights is recommended – that way you can see Phanom Rung at sunrise (or just early, around 0700, to beat the crowds) and then drive on to see the Temple Of A Million Beer Bottles before returning back to the city, or extend your stay and travel on to Ubon Ratchathani and then into Laos, where you can see Wat Phou, another beautifully preserved Angkor temple not in Cambodia.