December 2022: Indonesia has reopened to tourists. See our Can I Travel To Indonesia page.

Borobudur, the huge Buddhist monument near Yogyakarta, Indonesia, is Indonesia’s single most visited tourist attraction and looking up at this magnificently intricate and detailed structure it’s easy to see why. Besides the beauty of the monument itself, the views of the surrounding countryside, and especially Mount Merapi, it’s not difficult to appreciate why this has been such an important place to Indonesians and Buddhists for the past 1200 years. Borobudur is an important cultural and architectural site and should be on any travelers list while in the area.

Borobudur was built in the shape of a giant tantric Buddhist mandala, simultaneously representing the Buddhist cosmology and the nature of mind. The foundation is square and has nine levels; the lower six are square and the upper three are circles and all are decorated with thousands of relief panels and hundreds of statues of the Buddha. During a pilgrimage thousands of relief panels guide pilgrims through a system of stairways and corridors and follow a path circumambulating the monument while ascending through the three levels of Buddhist cosmology: Kamadhatu (the world of desires), Rupadhatu (the world of forms), and finally Arupadhatu (the formless world.)

Located only 40km northwest of Yogyakarta, Borobudur is easily visited from the city and can be combined with a trip to Mount Merapi, the Temples of Prambanan or on its own in a half day. Since it’s so close, there are a number of different ways to get to Borobudur, each are easy and some can be very cheap. Public buses in Indonesia are mostly used by locals and don’t see too many tourists, but if you are adventurous, the Trans-Jogja bus service runs from the Jombor bus terminal in northern Yogyakarta where you can catch a bus to Borobudur. It takes around 90 minutes and should cost around 10-15,000 Rupiah ($1-1.50USD) one-way. 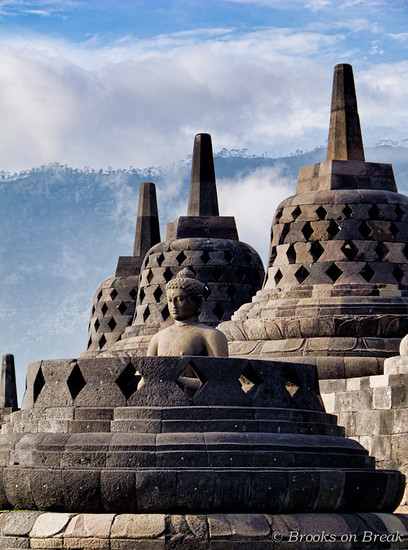 There are also myriad travel agents in Yogyakarta that sell door-to-door tour packages that start around 75,000 Rupiah ($7.50USD), which is a good deal and will be quicker and more comfortable than the public buses, but beware that some operators may stop off at Batik and Silver factories on the way.

Another option, since Borobudur is so close, is hiring a driver or renting a motorbike. It’s is a cheap and easy way to get there and the route is completely paved, with lots of signs the whole way. During my visit, my mate hired a motorbike with driver (125,000 Rupiah ~ $14USD) and tagged along on my rented motorbike (50,000 Rupiah ~ $5.50USD). It was an easy ride, that could have been done without the driver, and took us about 75 minutes to get there. I do want to note one thing about hiring a driver (as my mate did) or going with a tour company (as other friends did) is that none of them may actually act as a guide for you inside Borobudur. Both my mate, and our friends, had thought we were paying for this service as well, but with both, the driver stopped at the entrance and say that he wasn’t allowed inside. Apparently, the local guide service has a monopoly and if you’d like a guide, you’ll need to hire the guide service once you enter the complex that charges 60,000 rupiah ($6USD) for about an hour’s tour. We did choose to hire a guide and he was knowledgeable, spoke good English, and had even written a book on the monument complex. While certainly not necessary, I’d recommend it, as it was nice to have him decipher the panels and explain the history and the process of the pilgrimage. Another important note is that many tour companies will advertise a sunrise tour that leaves very early in the morning to get your to Borobudur early. Some even charge more for this service and talk about how beautiful it is to see the sunrise from the monument. The plain fact is, Borobudur doesn’t open until 6am and it’s difficult to get through and to the top before 6:30am which is about 45 minutes after sunrise and while it’s beautiful (and cool) in the morning, it’s certainly not the same as the impression you get while being sold the option?

Lastly, I’ll also mention that one thing I’ve learned about cultural sites in Indonesia is foreigners pay a considerably higher price than locals to visit. Unfortunately, Borobudur is no different, with locals paying 15,000 Rupiah ($1.50USD) and foreigners paying 135,000 Rupiah ($15USD). It’s a shame that travelers are asked to pay such a high price, but don’t let it sour your mood as you enter one of Buddhism’s most important and beautiful sites.