Get a unique view of night time Saigon from the back of a motorbike with XO Tours’ elegant female guides. Bob James heads out on a whistlestop run through six of Ho Chi Minh City’s districts with three spectacular pitstops for Vietnamese food. 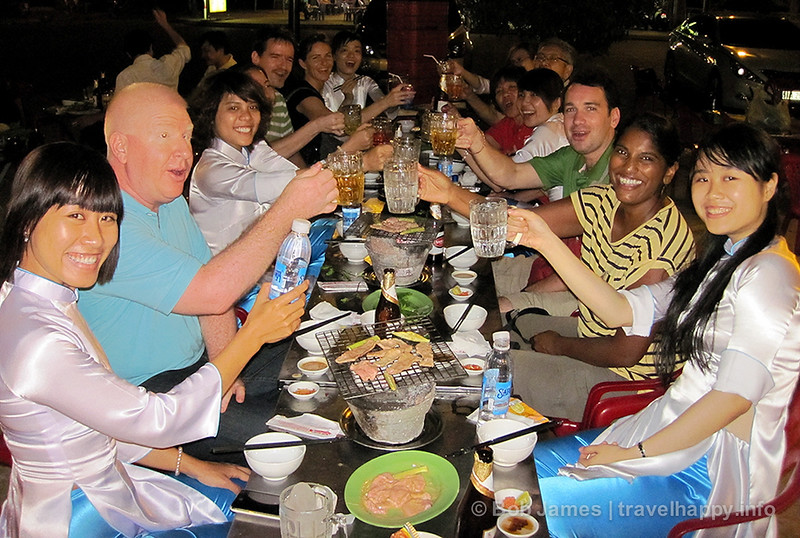 There’s a reason why many visitors to Ho Chi Minh City think Vietnam’s former capital is just another crowded, polluted and traffic-clogged Southeast Asian metropolis: They simply haven’t seen it all.

While the former Saigon certainly is all of the above, it’s also big. HCMC spreads out over 2,095 sq. kilometers (809 sq. miles) divided into 16 districts. Virtually all of the beaten-path tourist attractions lie in over-crowded, polluted and traffic clogged District 1. Hence, that’s all most people ever see.

Tung Do, a native Vietnamese raised in Texas, returned to his home country in 2009 and created a unique way to see – and taste – more of what Saigon has to offer. He created XO Tours, which puts young, attractive Vietnamese women dressed in traditional “bao dai” dresses on motorbikes to shuttle tourists – men and women alike – around to tourist sites, shops and restaurants.

By far, the most popular tour is “The Foodie,” an all-inclusive, 4-and-a-half-hours evening trip through six city districts with three food stops and all-you-can-drink beer.

Tung notes The Foodie is not so much a gastronomic tour as it is a chance to see how “real” Vietnamese live, work and eat. However, because it’s after-dark, the sightseeing is restricted to the back of the bike. The only stops are to eat, so there’s no browsing through night markets or checking out nightclubs.

The views, however, are surprisingly good. You’ll set out through District 1 just before sunset, moving north into District 2 where you’ll stop for Hue-style pho, known as “bun bo hue.” The setting is nothing special: plastic stools at aluminum tables. It’s an environment as authentic as the food, a mix of pork sausage, beef, noodles and lots of lemongrass. 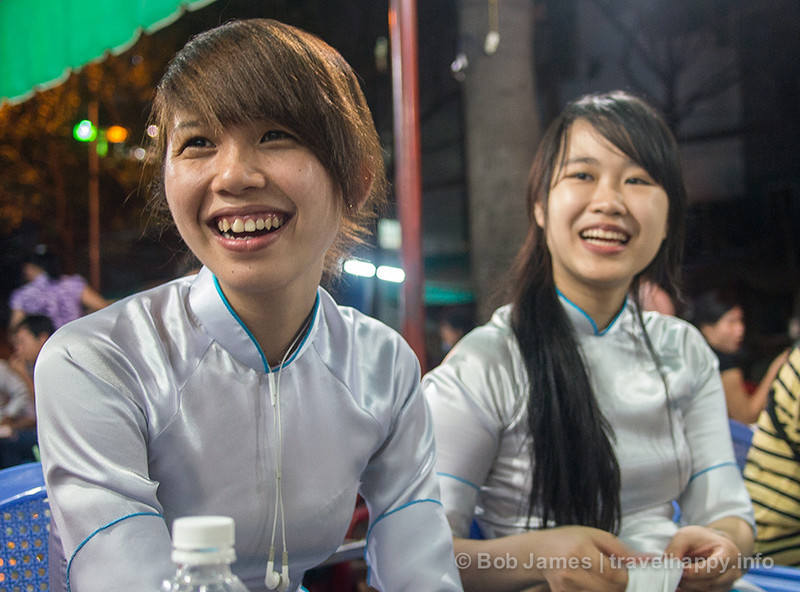 Use the search box below to find out departure times and prices on your selected travel dates to Ho Chi Minh.

An hour or so of touring follows, passing through a night-time food market on the side streets of District 5’s Chinatown, past the Bin Tay Market, through the retail-shopping spots District 6 and into District 8.

It’s there, at an outdoor barbeque restaurant, where the tour makes it next stop and the guides’ service really shines. Each of the ladies serves her individual customer personally, grilling the meat, peeling the shrimp and filling the bowl. Most men naturally would swoon at such traditional doting by an Asian female, but the women serve their women customers with the same care and attention.

The meal here is a real mix: shrimp, frog, okra and even goat, with cold bottles of Saigon Red beer to wash it down. And it’s not a tourist trap: Around you sit regular Vietnamese families out for an informal meal.

HCMC: A City of Haves and Have-Nots

Full and not-quite-tipsy – the guides threaten to tie any drunks to the back of the bike – the tour heads out again, this time past the nightclubs and karaoke joints of District 8 and into the posh District 7, an oddity among Ho Chi Minh’s zones.

Here Tung provides a short socio-economic lesson, noting how Vietnam is increasingly a country of haves and have-nots; where families of 10 are crowded into single-floor shophouse apartments while the rich pay 300% import duties on Bentleys and put all their money into District 7 condominiums to protect against the increasingly devaluation of the Vietnamese Dong.

The streets here are wide, well-light and oddly vacant. Most of the high-rises are dark, as the units are bought for investment. Those who actually live here are foreign expatriates who pay private security to patrol the streets as the corruption-filled police department cannot be trusted.

The bikes move out and back into society, passing upscale storefronts offering designer goods and back into District 4, one of the poorest zones in the city, for a seafood meal. Here the menu includes crab legs, clams, shrimp and “so diep”, scallops with peanut and onion on a half-shell.

Just the food alone would have been worth the $65 price of admission. But he chance to get out and see the city and the way its residents live their daily lives – dining, shopping, making out in the bushes at a public park because home is too crowded – was priceless.

As for XO, Tung was first in the market with the women-on-motorbike guided tours, but he’s been so successful, he’s been copied a couple times. The rivals try to compete on price, but don’t do it. XO is the only one with full accident insurance, runs all his own bikes, offers head-cam video for an extra fee and has polished his service to meet his Americanized standards.

Information on all XO Tours’ offerings and prices can be found at XOTours.vn