Walking through Hoi An’s streets, it’s hard to suppress the feeling that it’s not quite real. With its exquisite dark wooden houses, absence of cars and only the deeply romantic pedal-powered cyclos to negotiate as you wander its narrow, shady lanes, it’s impossibly picturesque, a town that feels like a movie set which has been custom built for tourists. Tourists have certainly had an impact; this is an artisan town, with virtually every shophouse jostling for attention to sell paintings, ceramics or tailor made clothes.

Courtyard cafes lie just off the lanes serving all manner of glorious Vietnamese dishes. You’re not going to run into a Starbucks or a Burger King in Hoi An’s old town. It’s this almost total absence of modern day architecture and neon logos that gives Hoi An its otherworldly charm and creates a palpable sense of refuge. The contrast with the bustling, polluted big city madness of Saigon couldn’t be greater. The only thing in Hoi An likely to bring you back to reality is an occasional whiff of the municipal drains. 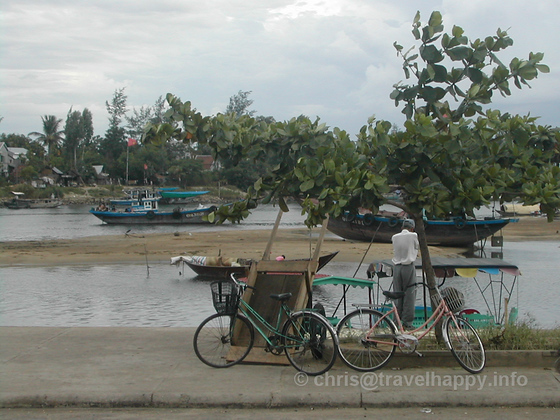 The old town of Hoi An is a square kilometre at most. Behind it lies the concrete urban sprawl of the modern town, where the majority of hotels are located. In front of the old town is the river, where much of Hoi An’s trade still goes on. Unsurprisingly, there is a string of cafes and restaurants basking in the bright Vietnamese sun overlooking the river, where you can lose entire afternoons watching the boatmen at work. If you want real, Italian coffee, look out for the Swedish-owned restaurant at the very end of the block, nearest to the wet market. Heavenly. It’s a ideal place to pause after a hectic morning’s perusal of hand made bags, paintings and sculptures.

Unlike most stuff that’s made for tourists, what you find in Hoi An isn’t authentic Vietnamese tat made in China. I bought an armful of handmade silk handbags for around 3 US dollars apiece that made me instantly more popular with several girls (and one slightly confused boy) back home. True, I had female advice on this at the time of purchasing – “No girl will ever look unkindly on a new handbag” quoth Louise sagely – but even I could see, in my wholly disinterested male way, that these were intrinsically great fashion items. 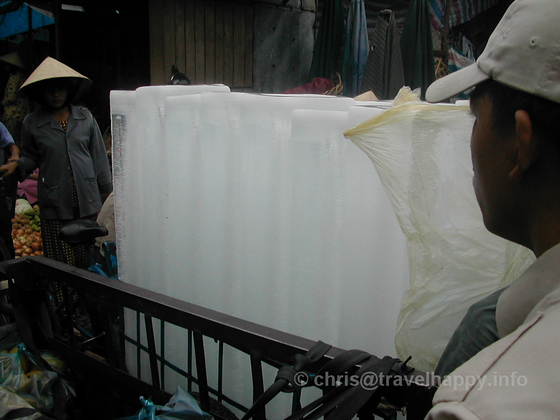 If Hoi An’s various trinket shops get a bit cloying after a couple of days, the wet market is the place to head to see what the locals get up to. You’ll need to get down there early as most business is concluded by 8am, but it’s a truly fascinating experience, as all manner of fresh produce, most of it still with a pulse, arrives in town and is haggled over by a sea of people in iconic conical hats. Huge, fridge-size blocks of ice are dragged through the rammed streets to keep the fish fresh while old ladies arrange piles of dragonfruit and other exotic edibles in artful poses on floormats. You have to keep your wits about you if you want to avoid clumsily treading in someone’s hard work. Against the backdrop of Hoi An’s river and shophouses, it has a distinct charisma to itself. You can retire to the riverfront cafes for breakfast and watch Hoi An’s version of the daily commute – big open-decked boats arriving at the riverbank crammed with people and bicycles slung together upright in neat rows hanging off the side of the boat. 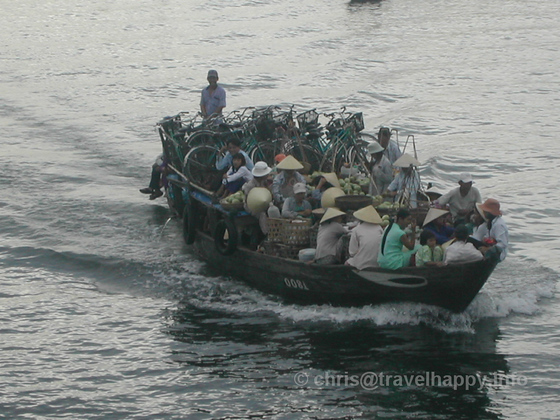 The wet market is where I got some of my favourite photos in Vietnam, in part I think because the images here corresponded to my own preconceived ideas about the country – that it would be all conical hats and market mayhem and the like. It’s like when I first saw labourers sowing rice out in the paddies, bent over in the knee high water, their faces hidden by their conical hats – it looks like a scene directly from a movie, or one immortalised on a thousand postcards. There’s still a sense of disbelief when you actually happen over these sorts of scenes that they are real – that this is what goes on even when you are not there. It seems somehow staged. I’m sure a backbreaking stint planting rice or heaving fish around would soon disabuse me of this notion.

Buy Tickets To Hoi An

Use the search box below to find out departure times and prices on your selected travel dates to Hoi An.

In terms of other examples of local colour, there are also some spectacular Vietnamese merchants’ houses in Hoi An which are open to the public. I can’t say anything about these as I shamefully ignored them completely in favour of an orgy of consumerist spending on clothes. It was Louise’s fault. Obviously. Initially sceptical – oh, ok, just plain scared – of having my ever widening vital statistics being reconfirmed by tape-wielding Vietnamese seamstresses, I soon picked up Louise’s enthusiasm for getting anything you wanted in the Next catalogue knocked off to your tailor made specifications for a fraction of the price. Show them a picture and they’ll make it for you. Hand made suit? $35 US dollars. Jawdropping. I pondered getting a linen suit just so I could be Our Man In Hoi An. Louise soon put a stop to that idea.

Like all great shopping moments, though, it’s not just the feeling of getting a bargain but also the people who are selling to you – our seamstress Hong, and her mum Flower, who had invited us in from the street in a disarmingly unpushy way, made us feel like we were in Vietnam’s answer to Savile Row. I left Hoi An with an entire new wardrobe – or rather, the wardrobe left me. Handmade shoes, shorts, shirts, suits and winter jackets were all shipped home, the postage costing a third of what the clothes did. Ouch. 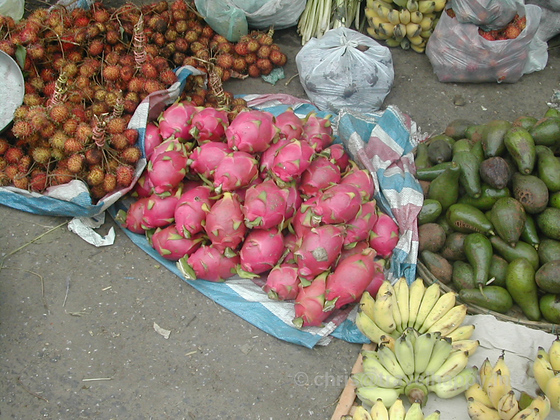 Vietnam seems to get more beautiful as you head north up the coast. From the big city chaos of Saigon, to the seaside fun of Nha Trang, to Hoi An’s quiet serenity, to the war-torn majesty of Hue, to the crown jewel of Vietnam’s cities, Hanoi. Hoi An itself provides the ideal place for time out from travelling, a place to spend several days doing very little very pleasurably. For those, like me, who are phobic about shopping, you needn’t worry about being harassed by hawkers at every corner – Hoi An is distinctly laid back. It’s one of those towns that still has a unique atmosphere, and that in itself is enough reason to go visit before it disappears.