Vietnam may not be the first place that comes to mind for kite surfing, kite boarding and windsurfing, but as Bob James finds out, the small town of Mui Ne has a big adrenaline sports reputation

The wind doesn’t blow stronger or more steadily than it does in this little town 150 kilometers southeast of Vietnam’s oldest and most-popular beach resort. So while the diving here is all-but-nonexistent, Mui Ne is Southeast Asia’s capital for kite surfing, kite boarding and wind surfing.

Buses run day and night in and out of Mui Ne, whose outskirts touch National Route 1A, with trips from Ho Chi Minh City running five hours and less than about four to Nha Trang. Buses run right downtown to the main tourist hotel strip Nguyen Dinh Chieu. Just beware the addresses, as they make little sense, with odd numbers at the south half of the street and odd numbers in the north.

There is also a daily train to Phan Thiet, about five kilometers from Mui Ne with fair, metered cabs available for the ride in. There’s also sporadic bus service into town for a dollar. 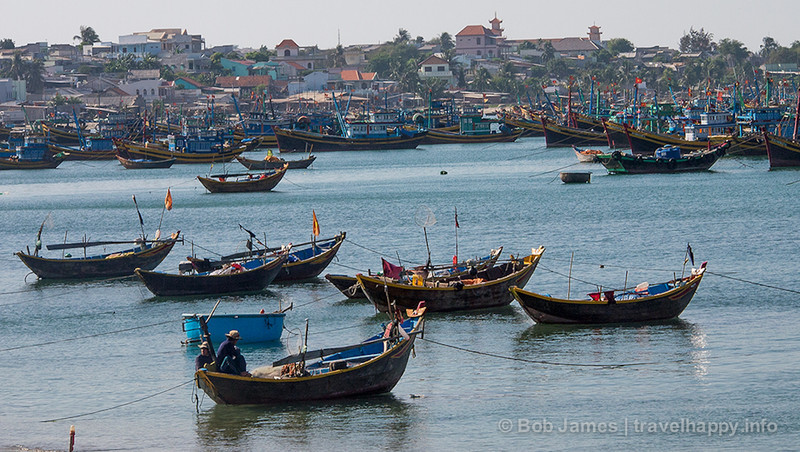 The question in Mui Ne is not where, but how much. The entire 15-kilometer beachfront is lined with hotels and guesthouses. Hotels can run into the hundreds of dollars per night, but it’s still possible to find guesthouses for about $15 per night. If you look at the map of the general area (known as Phan Thiet) you’ll see how stacked together Mui Ne’s hotels are.

Once you arrive in Mui Ne, you’ll think you’ve left Vietnam and arrived in a Russian beach resort. There are actually more foreign tourists in Mui Ne than Vietnamese and the vast majority of those are from Eastern Europe. In the south end of Mui Ne, many signs are in only Russian and Vietnamese.

On the other hand, the locals are very comfortable with tourists and speak better English (and Russian) than you’ll find in most places. But if you’re looking for culture and Vietnamese style, you’re in the wrong place. Mui Ne is about the sand, whether on the beach or the sand dunes outside town. (See related story.) 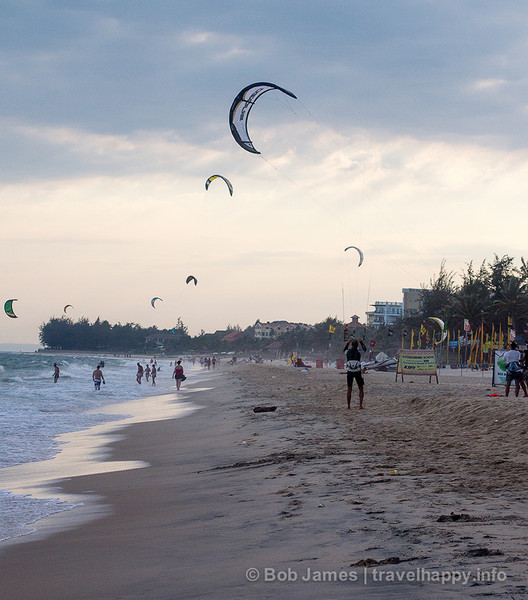 And the beaches are lovely. Erosion constantly plays games with the landscape, so some years you’ll find your favorite strip of sand is now rock, but come back in a year and it may be back.

The only obstacle to a good suntan is the preponderance of kite surfers, whose canopies fill the skies and whose boards come tumbling in on the waves with the riders.

There’s a core group of young guys (and the occasional girl) kite surfers who jump around Southeast Asia, doing a couple months in Mui Nei, jump a plane for a few weeks in Thailand’s Hua Hin or, for the adventurous, Pattaya’s Jomtien Beach, and Sihanoukville in Cambodia. But they’ll all tell you, it blows best in Mui Ne.

There are currently about a dozen kite boarding & surfing centers in Mui Ne and competition is fierce. Just a few years ago you might see just a couple of kites and sails on the water during an afternoon. Now it can be quite the spectacle.

Kite surfing centers and instructors are popping up everywhere, so choosing the right training place can be tough. Some good options would be C2Sky, the only International Kiteboarding Organization-sanctioned center on the beach, as well Storm Kiteboarding, and the German-run Windchimes. 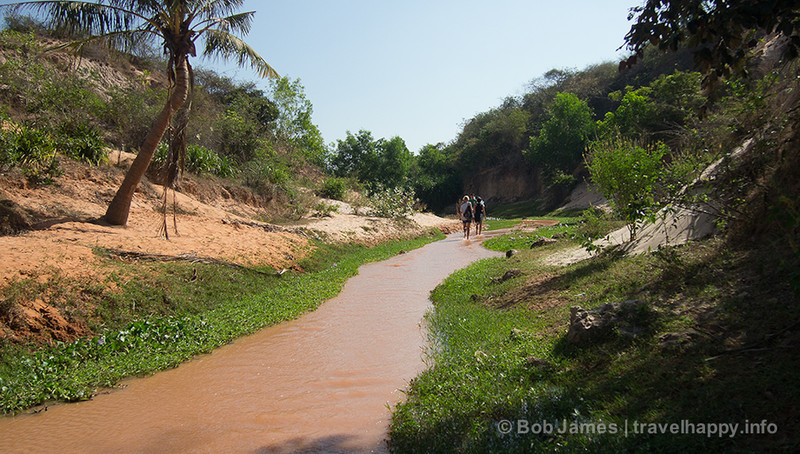 The Rest of It

Not ready to try wind sports? Be careful swimming. Don’t assume surfers will see or avoid you. Stay clear of launch and landing area and do your laps early in the day or after dark.

Mui Ne also has a few subpar tourist attractions, (not including the spectacular sand dunes) to while away your time. The Ham Nin fishing village is a sight to behold, with its odd round rowboats and the sheer number of fishing vessels in the bay. There’s also a “fairy stream,” which is little more than a muddy ankle-deep trickle of water and a hardly falling waterfall.

Basically, there are two reasons to go Mui Ne: The watersports and the sand dunes. Unless you’re into paved-over beach resorts filled with Russians, there’s no other real reason to be there. For the non-surfer, that’s about two days. For the active, it’s as long as your endurance (and money) lasts.