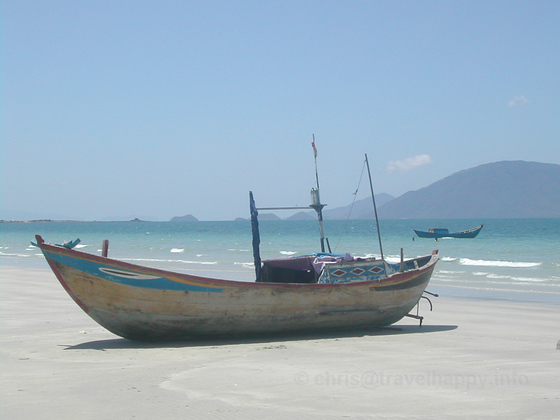 A perfect antidote to Saigon’s smoggy big city claustrophobia, Nha Trang is Vietnam’s premier seaside holiday town, popular with both Vietnamese and foreign tourists alike. It’s not hard to see why – Nha Trang has a couple of kilometres of relatively pristine white beach along which the town’s roads run parallel, topped off with a climate that feels much fresher than sultry Saigon thanks to the sea. Most of the town’s hotels and cafes are grouped around the streets nearest the seafront, making it easy to wander back and forth from the beach. The large transient population of farang tourists means Western food, toiletries and secondhand books are all plentiful in Nha Trang, ensuring there’s very little stress to interrupt those lazy days.

Scuba Diving
Besides sea and sand, the other main attraction of Nha Trang is scuba diving. There are several operations in town: Rainbow Divers, run by English ex-pat Jeremy Stein, is easily the most well-established. Rainbow’s distinctive logo is plastered over virtually every vertical surface around the town.

As well as dive sites around Nha Trang, Rainbow offer dives trips to the exclusive Whale Island resort further up the coast and also to Phuc Quoc island near the Cambodian border. For a country with such a vast coastline, Nha Trang seems to be Vietnam’s only established diving mecca. I didn’t hear of any other dive operations anywhere else along the coast, and I never managed to find out why there was such a dearth of them.

Nha Trang, however, has plenty to keep scuba divers entertained. During the five days I spent diving there, the sea was flat calm each morning, and apparently rarely gets choppy in season. A pleasant 30 minute cruise to the dive sites provides a chance to admire the rolling forest-covered hills around Nha Trang town and to enjoy the overwater big blue of a sparkling sea and vast clear sky under a progressively hotter sun.

Occasionally the tranquillity of a trip out or back to the sites is punctured by the blaring, distorted sound system of one of Nha Trang’s infamous party boats, whose punters are usually to be found in the water, floating around in rubber rings whilst being served a small ocean of the local booze. There are worse ways to spend the morning.

I dived three or four of Nha Trang’s dive sites, the names of which now escape me. All were fairly similar in profile – usually around 18 metres depth max, a sandy bottom and a truly spectacular amount and array of corals. Nha Trang Marine Park is apparently home to half of all the known coral species in the world, and it’s a claim that’s hard to disagree with.

You won’t find big marine life at Nha Trang, like sharks or manta rays (although there is a particularly huge moray eel, a couple of metres in length, who is occasionally enticed out of his hole with some tasty morsels). But there is an abundance of life here that makes for fascinating diving. Nha Trang is particularly famed for its nudibranches, tiny but exquisitely colourful creatures that sit amongst the coral. It takes a while to be able to spot they because they are so small, but soon they are to be seen everywhere. Given the vibrancy of the nudibranches and corals’ colours, plus the fact that neither of them tends to move much, Nha Trang is also well suited for those looking to hone their underwater photography skills.

Moreover, because each of the sites are relatively shallow and only require following the sea floor behind a guide, they’re perfect for those who want to learn scuba and for divers who are a bit rusty. It’s the ideal place for relaxed dives where you spend most of your time really looking at things rather than worrying about logistics.

The diveboats go out early in the morning, picking up divers from their hotels around 7 am and taking them to the port, which is already thronging with hordes of hawkers. The running joke on Rainbow’s bus is that “If you can’t find our boat, look for the red flag with the yellow star”. It’s not until you see the scores of fishing boats down at the port, all flying said Vietnamese flag, that the punchline becomes apparent.

There’s plenty more gags aboard the boat (“The toilet is next to the kitchen. Please don’t piss on the chef”) which makes the morning’s two dives and lunch pass by all too quickly. By 1pm everyone has been ferried back to the Sailing Club, perfect for ensuring that non-divers don’t feel neglected.

Around the town
Nha Trang has several sights worth seeing away from the sand and sea. The Cham towers, which sit perched on the town’s outskirts, are a place for the locals to come and pray. Traditionally young women seeking fertility frequent the towers and the shrines within them. When we were there whole families were milling around, enjoying the view and relative serenity the towers afford.

Also on another hill overlooking Nha Trang is a huge white Buddha statue, built back in the Sixties to protest against Communist mistreatment of monks. It’s worth climbing the hill’s many stairs and dodging the hawkers to see the Buddha just for its sheer size and also for the beautiful shrine built into the Buddha’s base. There is also a gaggle of kids, the children of the cold drink vendors at the Buddha’s summit, who want to play and have their photo taken. It’s quite difficult to move when you’ve got three giggling kids hanging off each arm. Initial paranoia that their hands might be heading for my wallet pocket was soon embarrassingly dismissed. Of course, there is a catch – the kids will ask you to buy them a can of “yum yum” to share, which is a fairly hefty 8000 dong (about 50 pence). It’s hardly going to destroy your travel budget though.

Doc Let beach
An unexpected highlight of our stay in Nha Trang was a visit to Doc Let beach, about an hour’s motorbike ride away. We hired two guides, Tong and Nam, to take us on the back of their ubiquitous Honda Dream mopeds. They thoughtfully provided helmets that looked more like riot police headgear. Having been impressed with Nha Trang’s hills seen from the water, burning along on the back of a bike up and don the roads that swept around them was great fun. The roads are good enough for you to drive yourself if you feel confident on a bike and, more crucially, know where you’re going. But half the fun of being with guides is not only finding out about the countryside, as you tear through it doing a good impression of a fairly sizable hornet, but also about themselves. Nam, my driver, used to be a racing driver. Unaware that the Grand Prix had ever been staged in Vietnam, I asked where he raced. “Here,” he said. “On the road. We race early in the morning when no cars around.” “Was it illegal?” I asked. “Oh yes. Very, very illegal,” he said, matter of factly. It suddenly occurred to me I had paid to put my life in the hands of a man who used to earn a living driving very, very dangerously.

When we stopped for a break by the roadside, I noticed several bamboo boats sitting on the side of the beach running along this stretch of road. For some reason, I suddenly became obsessed with going for a float in one of these completely circular craft, which looked like a giant bowl. Nam dragged me off down the beach to accost some shy but willing fishermen to help me fulfil my circular boat fetish. There was some merriment at just how much of the boat I managed to occupy – it’s not a slimming look, I’ll grant you – but one of the fishermen skilfully paddled us out into the river for a few minutes without me managing to capsize anything.

Once out of the hills, we came down into the flatlands, passing acres and acres of paddy fields and also pausing to look at some salt pens before arriving at Doc Let. The beach itself is no great shakes, but it’s easy to find a spot to yourself and the unrestricted view of the sea, punctuated by fishing boats anchored in the surf, is quite beautiful. It’s perfect for a few hours of sunbathing and swimming, which is exactly what we did, and provided a much needed arse-restoring break from being on the bikes for a solid couple of hours. Food was provided by a persistent but polite little girl, who continually invited us at half hour intervals for a fresh seafood lunch, to which we eventually gave in. While the presentation was debatable – dead things in a plastic bag – the king prawns she served up were sensational, expertly cracking open and stripped each prawn before handing it to us.

Our day out at Doc Let doesn’t really add up to much on paper – a bike ride, sunbathing, swimming and a seafood lunch – but the combination of these made Louise and I agree that this was one of our favourite days in Vietnam.