David Lean’s classic 1957 World War II movie Bridge on the River Kwai depicted the horrors endured by the Allied prisoners of war (POWs) forced to build the Thailand-Burma railway by the Japanese Imperial Army. Thanks to the film, the Bridge, situated in the Thai town of Kanchanaburi a couple of hours drive from Bangkok, is one of Thailand’s most popular tourist attractions. However, the true history of what really happened during the building of the bridge over the River Kwai has almost been erased by the popularity of the movie. 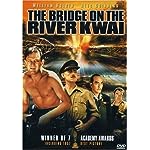 See all books by David Lean at
Amazon.co.uk | Amazon.com

The screenplay was adapted from Frenchman Pierre Boulle’s novel The Bridge Over The River Kwai, which blended fact and fiction in an attempt to portray the futility of war. Lean’s offering further distorted the building of the infamous Death Railway. “I have never ceased to object to the way in which the cinematic legend has overtaken and obscured the facts of what really happened on the Burma-Siam railway,” wrote the former prisoner of war John Sharp.

Julie Summer’s book, The Colonel of Tamarkan: Philip Toosey and the Bridge on the River Kwai aims to set this record straight.

Toosey was the Colonel of the British Army’s 135 Field Regiment, Royal Artillery. After his troops were imprisoned by the Japanese and shipped to Thailand he became the commander Tarmarkan Camp in Kanchanaburi. Summers is his granddaughter, who from an early age baulked at how the fictional, foolish character of Colonel Nicholson, played by Alec Guinness in Lean’s film, reflected on the real man.

See all books by Pierre Boulle at
Amazon.co.uk | Amazon.com

Her book makes use of extensive interviews with Toosey’s friends, family and comrades from the war. Summer has trawled official archives, autobiographies and war histories, to build up an accurate image of what the real events were.

The end result is a compelling read which follows Toosey from his pre-war childhood, through his occupation as a cotton trader, his joining of the Territorial Army in peacetime, the British surrender of Singapore 15 February 1942, to his imprisonment in Thailand until the Japanese surrender and his release on 17 August 1945, and his life after the war.

By all accounts Toosey was a great man and an inspirational leader who successfully walked the line of military efficiency and winning the respect and loyalty of his men. He used the same skills that won him the Distinguished Service Order during combat in Singapore, to build and maintain a series of disciplined POW camps, understanding that high morale and mental health were as important to the survival of his men as food and medicine. 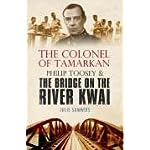 The Colonel Of Tamarkan – Julie Summer

See all books by Julie Summer at
Amazon.co.uk | Amazon.com

Saying this, he was not averse to disciplining his men or using extreme measures if the situation demanded it. One only has to look at the statistics to see what the POWs were up against.

The railway was completed on October 17, 1943. It had been built at a rate of half a mile a day in little over a year. More than 12,000 Allied prisoners – roughly one man for every sleeper along the 415kms of track – and a shocking 93,000 Malays, Tamils, Burmese, Javanese and Thai laborers died in its construction.

Summer deftly communicates the misery of life for those forced into slave labor, working on a starvation diet for up to 18 hours a day in the unfamiliar inhospitable terrain of disease-ridden jungle. Prisoners and laborers were subjected to humiliating treatment, beatings and torture dispensed by Japanese and Korean prison guards for the most minor of infractions.

Toosey took many beatings from the Japanese for standing up for his men, who he demanded high standards from – those who failed to curb their needs for the greater good were dealt with decisively.

When one prisoner was seen stealing a blanket from a dying man at Tamarkan, the Colonel’s response was swift, brutal and served as a message to anyone else thinking of doing the same. “If you ever dare to step out of line I’ll starve you to death and you know I have the power to do it because I’ve got control of the food. Now, you are going to get beaten up by two regimental sergeant majors behind this hut,” he said.

While The Colonel of Tamarkan provides a window in on the harshness endured, it also serves as an account of the championing of the human spirit. It highlights the ingenuity of prisoners, who extracted yeast – a vitamin rich food source, essential in keeping disease at bay – from urine, and who built surgical instruments from forks and combs, water pumps from bamboo, and secret radios from razor blades and wire.

Anecdotes shed light on “V”, a network of Thais and Chinese, and foreign civilian prisoners, who risked torture and death on a daily basis to supply information, food, money and medicine to the POW camps.

While Summer’s writing is clunky at times, and one has to wonder just how objective a loving granddaughter can be as a biographer, she has brought a significant part of war history to light, and her book reminds us all of our innate capacity for both good and evil.

The profound and surprising effects of living through such an ordeal are best left to Toosey’s own words. “People say to me ‘what a ghastly experience’ and I say, ‘My dear friend, it was nothing of the sort. It was an experience which I could not go through again but I wouldn’t have missed it for anything. It taught me so much about human beings.”