Book piracy is big business in South East Asia, with an eclectic range of counterfeit novels, travel guides and history books all on offer to backpackers looking for an illicit bargain

The photo below is of one of the numerous mobile booksellers to be found in Vietnam. They come up to you with their box of books while you’re sitting in a cafe nursing a beer or a coffee and ask you in perfect English and a bright smile if you want to buy a book. A deeply civilised idea. But it’s not the usual secondhand book collection – all these titles are brand new bootlegs of popular Western books selling at a fraction of their official cover price.

As you can see from the closeup photo of the box itself, there’s a mix of titles carefully picked to appeal to travellers. The books range from the obvious Lonely Planet editions for neighbouring countries Laos and Cambodia through to popular novels like Nick Hornby and (hawk, spit) Tony Parsons though to classics like Catch 22, On The Road and To Kill A Mockingbird. 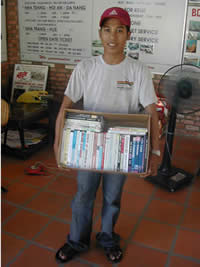 Many of the titles are unsurprisingly travel themed – Emily Barr’s Backpack, William Sutcliffe’s Are You Experienced and William Dalrymple’s In Xanadu. There are also history titles, usually dealing with either Pol Pot’s genocidal Khmer Rouge regime (such as The Killing Fields or David Chandler’s Brother Number One: A Political Biography of Pol Pot) or the Vietnam War. Duong Thu Huong’s Novel Without A Name, depicting the Vietnamese perspective of what is known in that country as “the American war” and The Girl In The Picture, Denise Chong’s vital autobiography, describing her life from the day she was hit by napalm and photographed running towards the camera naked from her village – the image that became perhaps the most famous of the Vietnam War. [I wrote more about this on my litblog Splinters].

There’s also a bit of mystical stuff from Paulo Coelho and an inevitable John Grisham novel too. But I was continually surprised at the selections available as I travelled through Cambodia and Vietnam – I thought it would be wall to wall airport thrillers, but this mix of travel and history books was the usual selection. These titles are only present in the box because they sell – someone somewhere is busy photocopying the pages of the original and adding a colour cover to produce a book that sells from anywhere between $1 to $5, depending on your bartering skills. With the books so cheap, I found myself reading stuff I never would have bothered with before, like Coelho’s Alchemist and Nick Hornby’s High Fidelity. I was surprised at how much I enjoyed The Alchemist, and it was fun to break out of my own reading ruts.

The quality of the books varies tremendously – some are just crude photocopies with a washed out colour photocopy cover wrapped around them that start falling to bits after a couple of reads. Others are more sophisticated, with real stitching and card covers. On my recent visit to Angkor Wat in Cambodia, I bought bootleg copies of Dawn Rooney’s Angkor and Michael Freeman’s Ancient Angkor for $4 and $3 respectively, which are almost indistinguishable from the real thing – they both have stiff covers and are packed full of perfect quality colour photos. Whoever is producing copies of these is going to great lengths to do so. Only the crappy glue of their binding gives them away – they’ll both start shedding pages soon. Still, given these books retail at around $15US each, it’s an illicit bargain.

Talking to the book vendors is as much fun as the feeling of getting something for almost nothing. In Vietnam and Cambodia, they usually speak good English and are happy to engage in conversation. This isn’t just because they’re good salespeople who want to establish a rapport with you, (although that’s definitely an element), but usually because they want a break from lugging a huge box of books around. If you have a chat with them and a bit of a giggle they usually give you a “special discount” – it’s a lot more fun than having one of those deeply tedious bargaining arguments.

The kids around the temples at Angkor are breathtaking in their English ability – their average age can’t be more than eight or nine but they speak English fluently, almost without a trace of an accent. They are adept at cajoling and bargaining with you – everytime you step out of your car to go look at a temple, a gaggle of them will descend upon you, grinning, shouting and waving books, silks, ornaments and t-shirts at you. The smaller ones prod you in the belly to get you to look downwards at their merchandise. Others mark you from the start: “When you come back from the temple, you come and buy from me. What’s your name? My name is Vanna. I remember you, you remember me?” So it goes as you move inch by inch surrounded by this mini-riot until you get to the temple entrance. It’s pretty intimidating at first, but smiling your way through it all works a lot better than shouting.

They’ve got a hard gig – sometimes you see them in tears at the end of the day because they’ve sold nothing and have to go home to the parents empty handed. On the other hand, selling bootleg books to the likes of me means they can earn considerably more than the average Cambodian wage of a couple of dollars a day. I wonder what’s going to become of these kids, how they will grow up, whether their English skills will help them get ahead and whether their bargaining skills will make them all become entrepeneurs. Following the life of one of them would make a good book in itself.

Peculiarly, here in Thailand, where bootlegging of clothing brands, DVDs and computer software is rife, books remain almost wholly legitimate. Perhaps this is because there are numerous brand new book stores like Asia Books which retail large stocks of Western books at pretty much their original US or UK price – or perhaps it’s just because the bootleggers see much more profit in their traditional fashion and computer markets. Certainly backpackers in Thailand suffer from wily secondhand book merchants who know the value of their merchandise and rarely let you buy a used copy of a book for less than 300B – around $7.50, which is hardly a bargain.

Therefore, for backpackers heading from Thailand into Cambodia and Vietnam, the only ethically dubious but financially intelligent option is to try and hold on til you get to Phnom Penh, Siagon or Hanoi and splurge on the array of cheap books that will inevitably find their way to your cafe table, complete with a cheeky grin and an immaculately pronounced “How are you today?”