Inle Lake is a huge area, and the fact you need to get a boat pretty much everywhere means some planning will make for a much better experience. Bob James makes some suggestions of things to see and do at Inle Lake

Children growing up on Myanmar’s Inle Lake first learn to walk, then to pilot a boats. There are no roads here. If you want to go to work, the market or just see a friend, you go by boat. The same holds true for tourists: If you want to experience the former Burma’s most-unique region, you’re going to need a boat guide.

The following is a guide of what to see and do at Inle Lake – if you want information about How to get to Inle Lake and Where to Stay, see Travelhappy’s previous Inle Lake Orientation post. If you’re looking for Inle Lake hotels, check Agoda for availability.

How Inle Lake Boat Tours Work
Boat tours can be hired either in travel agents or via off the street in Nyaungshwe and start at around $18 for an eight-hour tour of the North Lake. (See TravelHappy’s guide to Nyaungshwe for full details.)

Your day will start around 8 a.m. the next morning. Besides a camera and sunscreen, you’ll also need warm clothing; it may have been roasting in Bagan, but it’s cold on the lake. Dressing in layers is best, as you can strip down as the day gets warmer.

What to See (and Skip) At Inle Lake
Inle Lake tour agents and guides have a well-established route for tourists, but following it will leave you less than satisfied if you’re trying to explore “real” lake culture. Although Myanmar attracted only about 300,000 western tourists in 2011, Inle’s tourist route is small and very much overrun with boats full of foreigners.

If you’ve arranged a private guide, also create a private itinerary, dropping points that likely will be packed with white faces can be a smart move. On the North Lake, a couple of stops can (or should) be outright skipped. 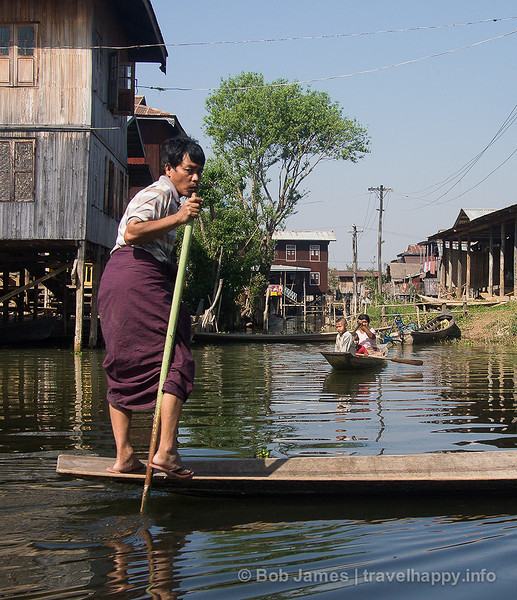 A Less-Touristy Route Around Inle Lake
For an enjoyable trip of about seven hours veers a bit more from the usual route, try an itinerary that takes you into the middle of the lake early to watch fishermen, then on to Nampan’s “floating” village, the tribal villages along the muddy canals behind Nampan, the weaving factories of Phaw Khone, the “floating gardens,” the “split-personality” village of Maing Tauk and the touristy, but still cute, “jumping cat monastery.”

Nampan
Technically, all of Inle Lake’s villages are “floating,” meaning houses are
built on stilts or float on the water’s surface. Nampan, principally a bedroom community for fishermen, is one of the larger ones on the North Lake and early in the day you’ll see kids as young as 3 or 4 paddling around, women doing laundry or even bathing (with clothes on) in the lake.

With my constant photo-snapping and requests to slow down, my young guide figured out what I wanted to see and, instead of heading back out into the lake, pulled into another Burmese village next to Nampan and then an Intha village behind that. The cultural pecking order was much in evidence here, with Nampan’s clear lake water and lush embankments giving way to muddy rivers and rougher landscapes.

In Phaw Khone
Just north of Nampan is In Phaw Khone, a working village devoted to silk, cotton and lotus root weaving. Sure, it was a a bit of a tourist trap, complete with store at the end of the tour, but the weaving didn’t stop when the tourists left and the vast majority of the finished products were sold at local markets, not in the gift shop.

Floating Gardens
WIth no land to grow crops on, Inle residents have built their own “floating gardens.” The man-made plots are about a meter deep and supported with bamboo. Your guide will invite you to step out, but be careful: It’s like walking on a waterbed!

Be careful not to come at lunchtime or during prayers, as the shows won’t be available. The cats will be lounging around on mats, though, if you want to try an entice them to jump.

Maing Tauk
After a longish ride back up the lake toward Nyaungshwe, you’ll get the grand finale of the day: Maing Tauk.

This is a village with a split personality: half is on water, half on land. It also boats a 500-meter teak bridge similar to Amarpura’s U Bein Bridge, only not nearly as long or high.

You’ll pull up to the bridge and invited to go ashore for a walk through town, which consists of just two dirt roads. You’ll see women carrying cords of firewood on their heads, schoolkids in uniform getting out of class and the obligatory foreign couple that pedaled on bicycle from Nyangshwe.

They’re all simple-life scenes, but the scenery is so beautiful and the atmosphere so relaxed, you’ll float away from Inle Lake feeling you’re truly experienced something unique.