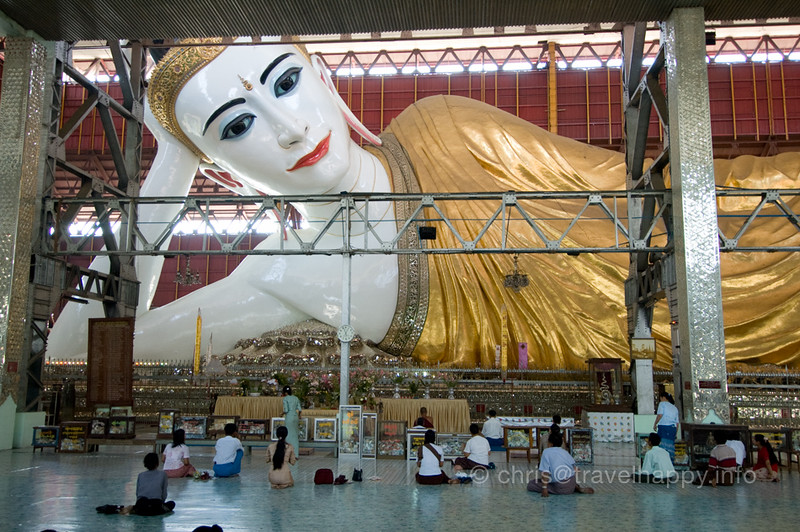 Nothing had quite prepared me for this. I’d gone to see the giant Reclining Buddha at Chaukhtatgyi Temple, and even though I sort of knew what to expect when I got there, I still found the sheer size and presence of the Chaukhautree’s Reclining Buddha to be breathtaking.

Housed in an open sided steel and corrugated iron structure that looked more likely to host a rock concert, the Buddha gazed down on the handful of Burmese worshippers gathered around at the base of its face. There were plenty of other people scattered around the Buddha’s space further away from the statue itself, like some of the old ladies napping off to the side, or simply escaping the heat of the day. The sense of space and light flooding in from outside coupled with the relatively few people here made it a real sanctuary from the crowded pavements of Yangon’s city life.

The Buddha itself was quite mesmerising to look at. At first I thought it was horribly gaudy, with the bright red lips and white skin and pink toenails – but the more I looked at it, the more it seemed to make sense. Certainly, the amount of photos I took during my hour there indicate how I couldn’t stop looking at the Buddha.

I was the only foreign tourist at the temple, and I was a little worried about being intrusive and getting in the way of people while waving my camera around, but a kindly monk guided me to a viewing platform that had been built specifically to give a view over the fence surrounding the base of the Buddha. Clearly they are used to tourists wandering in here. 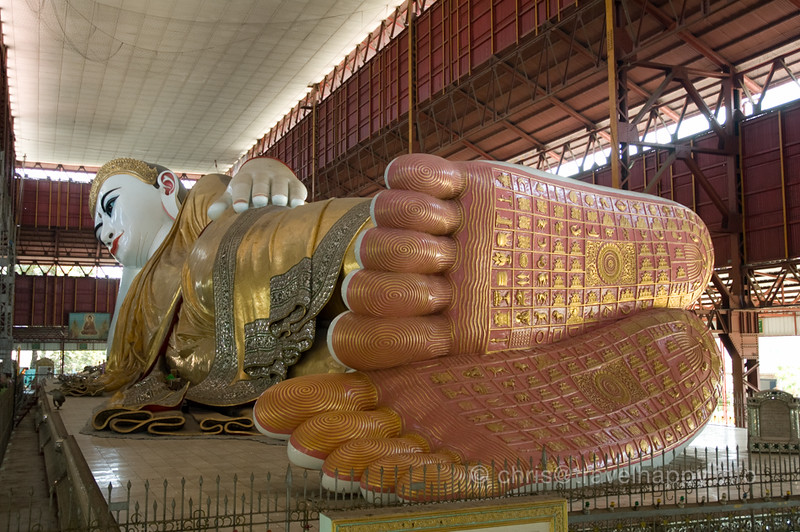 I’ve seen a lot of Reclining Buddha statues while travelling around South East Asia over the last few years. The reclining Buddha is a common motif in the temples and holy places of Thailand, Laos and Myanmar and perhaps the most famous example is the spectacular golden Reclining Buddha at Wat Po in Bangkok, which itself is absolutely huge. Wat Po’s Reclining Buddha is one of my favourite places in all of Thailand – there’s something about the relaxed pose of the Buddha I find very serene, and I am also, somewhat less spiritually, a definite fan of Very Big Things. (Sukhothai, Thailand’s equivalent to Angkor Wat in Cambodia, also has some exquisite large Buddha statues).

I think, although I’m not sure, that the Reclining Buddha at Chaukhtatgyi is even bigger than the one found in Wat Po, and apparently the biggest Reclining Buddha of all, the Shwethalyaung Buddha which is some 55 metres long, lies a couple of hours drive outside Yangon at Bago, which unfortunately I didn’t get a chance to see this time around.

Besides Chaukhtatgyi’s Buddha itself, almost as interesting is the community that’s grown up around the temple. There’s a whole collection of wooden houses and paths running off the main walkway up and down the hill, with little kids playing football while the adults go about their daily chores. Walking back down the small hill on which the temple is built, there were large, deep scarlet squares of cloth hanging either side of the covered walkway, gently swaying in the breeze, that gave the area a picturesque charm. I was snapping away taking photos of the walkway when I saw two monks looking at me with a mix of amusement and bafflement. I suddenly realised that these ethereal scarlet cloth hangings were actually robes hanging up to dry. I’d been busy taking photos of monk laundry.

With a somewhat sheepish smile, I carried back down the hill until I re-emerged from the peaceful gloom of the temple into the scorching sunlight of the main road with cars tearing by. The Reclining Buddha is definitely worth seeking out yourself if you go to Yangon.

The easiest way to do it is to ask a taxi driver to take you there. If, like me, you prefer to walk, here’s how to locate it yourself. Chaukhtatgyi is mentioned in the Lonely Planet Myanmar and marked on their Yangon city map, but it’s not the easiest place to find. Walking down Shwe Gone Daing road, there is an enormous pair of guardian chinthe, lion-dragons flanking the walkway up a hill to Ngahtatgyi Paya, which is a wholly different temple. Directly opposite the lion-dragons on the other side of the road, there is a small tarmac road leading down a small hill. At the bottom, visible from the main road, is the decorated gateway entrance to a temple. There’s no signs saying it’s Chaukhtatgyi.

Passing through the gateway, there is a steep covered walkway leading upwards, with several other walkways leading off it and various vendors along the way. Head up the hill until it levels out. At the top of the hill, take off your shoes as you’re now in the temple compound. Turn right and walk a couple of metres. There’s a building to your left and an open sided, huge building to your right. The Buddha is in the open sided building. You can’t miss it!