Kevin Revolinski gives the lowdown on things to do in Mandalay, Myanmar’s famous northern city which is the gateway to the surrounding countryside

Mandalay is Myanmar’s second largest city and in terms of commerce, it’s most important. The population surpasses one million, and though it is a center of Burmese culture, immigrants from Yunnan Province are quickly bringing a Chinese counterculture as well. Just wait until that highway from China opens up. There’s enough to see here to spend a few days on your way north or as you are waiting to board a local boat for a full day’s journey south to Bagan.

You’ll see the big ramparts and surrounding moat and think this must be a big deal. Well, it was. When the monarchy came to an end, this was its last home when the British took it in 1885 and ousted King Thibaw. During World War II most of it was destroyed by fire and what you see today within the walls is a reconstruction from the 1990s. The space is shared by military grounds now, but you can still see what the Glass Palace quarters, the Great Audience Hall, and Lion Throne Room looked like. There is also a climbable watchtower. The Royal Mint and a clocktower survived the WWII fire. If you have time to kill, it’s worth seeing. Oh, and do NOT take photos of the soldiers or military installations. 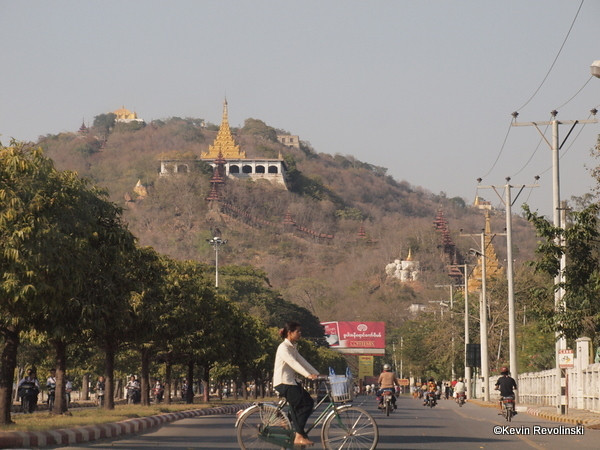 For those who love views, head up Mandalay Hill for a view of the city. You can get to the top with a vehicle, but you can also make merit by climbing this 240-meter hill on foot as you pass Buddha images, flower vendors, and ogre statues. Get there for sunset.

Just off to the southeast of Mandalay Hill for a convenient stop, is Sanda Mani pagoda. Inside you’ll find the largest iron Buddha, topping 18.5 metric tons and, like most important Buddha images, arriving here via various previous homes due to war and changing capital cities. This location was where King Mindon’s provisional palace once stood, and the pagoda was his memorial to a younger half-brother. Recognize it by the large collection of white pagodas standing tall and narrow.

Also close to Mandalay Hill, this pagoda takes its name from its central Buddha image, a large statue carved from light green marble. Surrounding it are 80 shrines to the 80 Great Disciples of the Buddha. The statue is carved from one piece of marble and comes from 20 km north of Mandalay. It is said that more than 10,000 workers were required to move it to its home here. 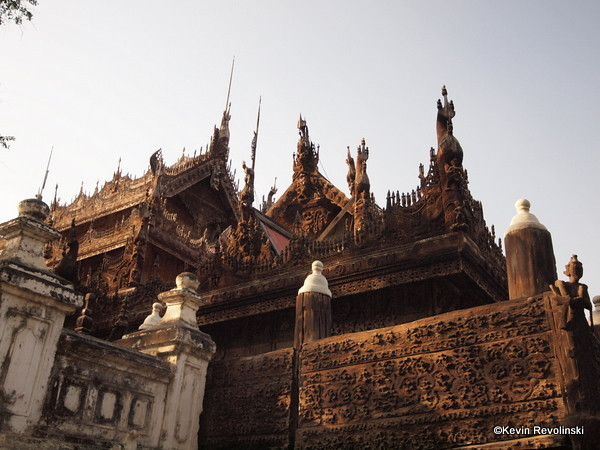 Once part of the king’s residence, this beautifully carved teak pagoda is a must see. It is one of the few original buildings surviving in Mandalay but it is not in its original location. It was carried piece by piece from the palace grounds and set up here as a Buddhist monastery in 1880. 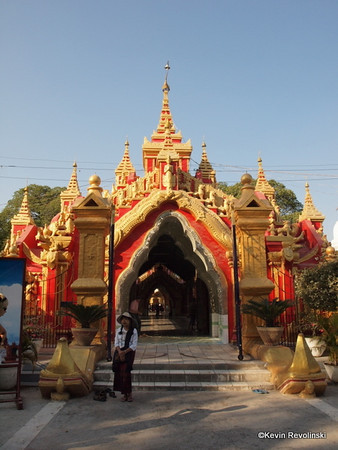 This may seem like a pagoda, but actually it is a book. Only partly kidding: each of the 729 small stupas spread throughout the grounds contains a tablet with part of the text of the Buddhist scriptures. 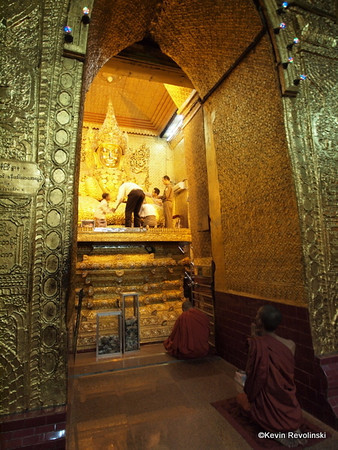 Situated on a road leaving Mandalay to the southwest, this is one of the most important pagodas to the Burmese. Within is a Buddha image that is believed to be one of only five that were made during the earthly lifetime of Siddhartha Gautama. (Two are in paradise, so you might count them as three on earth.) The 6.5-ton bronze Buddha sits at the center of the complex and the faithful parade past applying squares of gold leaf as they go. For something special for early birds, get there at 4 am when monks wash the Buddha’s face and brush his teeth.

Located just outside Mandalay, this road is lined with workshops where carvers use power tools and abrasives to carve and polish stone Buddha images. It’s a sight to behold but one wonders if visitors – let alone the regular workers – ought to be wearing eye and breathing protection. There are wood carvers among them as well. Most are amenable to having their pictures taken.

If you ever wondered where the abundance of gold leaf squares comes from, the ones stuck on sacred Buddha images and the like, then this is your answer. Gold nuggets from northern Myanmar are pounded for hours between bamboo sheets and cut into squares. It’s hot here as air-con would make the metal even harder to worth with. The work is hard and you’ll never look at those thin little squares the same way again. 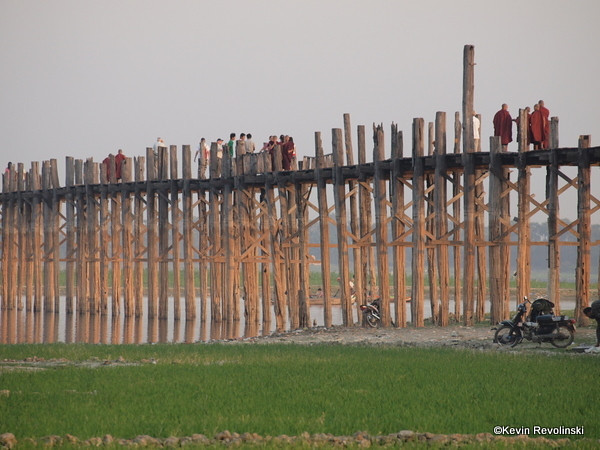 Located in Amarpura, a town south of Mandalay, this bridge, named for the mayor who built it, is the world’s longest teak bridge at 1.2 km. The footbridge spans the waters of Taungthaman Lake and makes some very nice photos at sunset or sunrise. Many locals cross on foot or bike. See also Bob James’ take on travelling to U Bein Bridge and also Jodi at Legal Nomads’ U Bein Bridge photo essay.

Also consider taking a day trip up the river on a local boat 11 km to Mingun. This is another former capital of the kingdom though today it is just a dusty little town off the beaten track. Greeting you at your beach landing is Pondaw Pagoda, a small construction with white statues looking out over the Ayeyarwady River. Not reason enough to come here, but added value. The main attraction, other than being in a quiet Myanmar town, is seeing a monstrosity of a pagoda that was never completed. It was commissioned by King Bodawpaya in 1790. Had it been finished, it would be the largest in the world. What you see today is a massive brick construction with large jagged cracks from the earthquakes of yesteryear. It is climbable for sweeping views of the river and countryside, but you need to leave your shoes at the bottom.

Also in town find the world’s largest ringable bell, weighing in at 90 tons. Near the unfinished pagoda is Hsinphyumae Pagoda, a gleaming white round stepped pagoda built in 1816 in memory of a deceased princess.From the incredible ancient city of Bagan to Myanmar’s quiet and beautiful beach resort towns, spending two weeks in Myanmar lets you see all of the country’s top destinations at a pace that means you won’t need to rush from one destination to the next.

Below, we’ve prepared a two week travel itinerary for Myanmar that visits the interesting cities of Yangon and Mandalay, the ancient Buddhist temples of Bagan, the relaxing coastline of Ngapali Beach and the incredible natural beauty of Inle Lake.

Note: Although Myanmar is a developing country, travelling can be surprisingly expensive. Our How Much Money Do I Need For Myanmar? guide explains how much you should budget while visiting Myanmar, from hotels and transportation to restaurants and bars.

Day One: Arriving in Yangon

Day 11: Things to Do in Mandalay

Day 13: Back to Yangon and Home