It’s like something out of Harry Potter: a gold spired monastery clinging to the top of Mount Popa, a craggy finger of rock towering 700 metres above the surrounding Myingyan Plain.

Ever since I’d seen a panoramic photo of Mount Popa in a magazine, I knew I had to go and visit it during my visit to Myanmar. It seems almost unreal, the gold of the monastery spire at the top of Mount Popa nearly blinding as it catches the intense mid morning sunlight. And the rock itself on which it perches looks frankly supernatural, thin and narrow and surrounded by flat plain all around it 700 metres below. It’s like the temple got suddenly elevated skywards, straight up and half a mile above the ground. 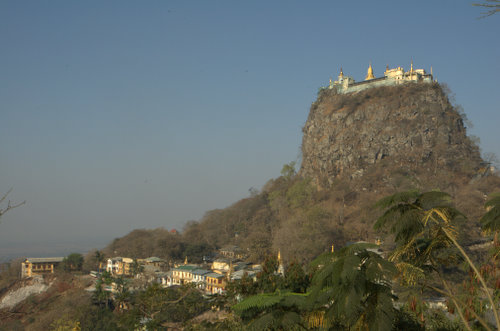 Here’s a closeup of the temple on top of Mount Popa which is a bit clearer (both of these pics look a lot better in the enlarged versions – click for bigness). Mount Popa itself is apparently an extinct volcano that last erupted over 300 years ago. Unsurprisingly, its dramatic appearance has led Mount Popa to be a revered holy site for centuries, and it’s considered to be the home of the most powerful “nats”, or spirits, that dominate Burmese mythology and religion. 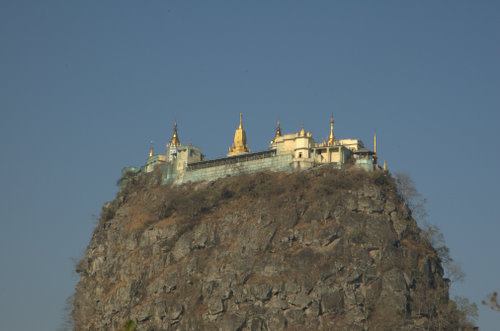 The climb to the top of Mount Popa is not to be undertaken lightly. I saw a middle aged French couple almost have twin coronaries two thirds of the way up. There’s a lot of stairs, some of which are steep, but it’s an entertaining climb. On the lower reaches are plenty of hawkers touting their wares, which thin out the higher you get.

At the main entrance there’s a collection of outdoor tea shops providing refreshment for Burmese pilgrims coming up or going down. And wherever you are on the climb up or down, there are always the monkeys, which bounce around you, swing from the walkway’s roof rafters, and fight over the cornets of peanuts which visitors like to buy and hand out to these slightly tatty looking furry agents of mischief. you probably want to avoid getting bitten by one of them… 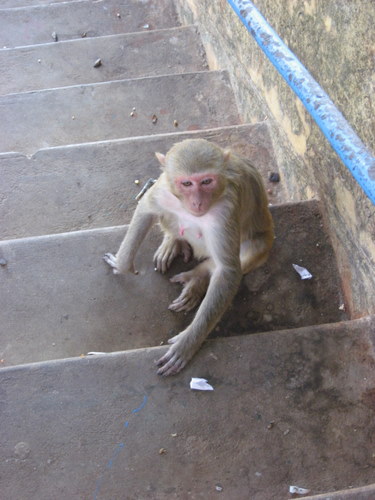 Once at the top, there’s a labyrinthine of different shrines in the temple to explore. 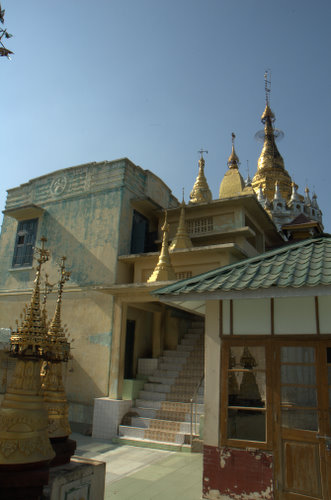 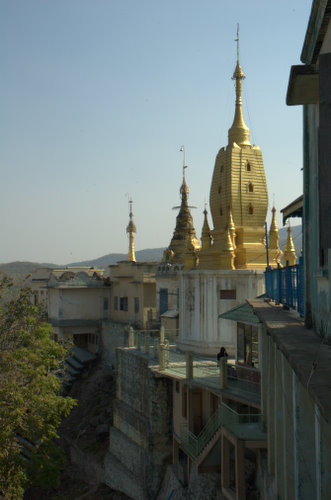 And this is one of my favourite photos, as it shows the backdrop of the ground far below 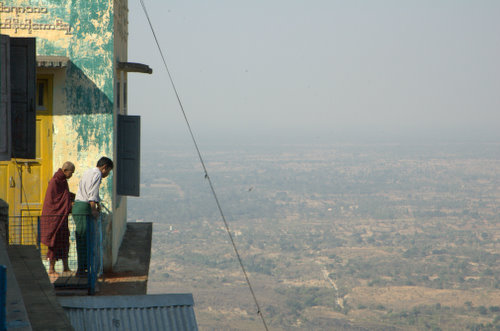 Getting to Mount Popa:
Mount Popa is a popular half day trip from the temples of Bagan, Myanmar’s most important cultural tourist attraction. Mount Popa is a couple hours drive away, and it costs around $25 US to hire a taxi to get you there and back. The drive is worth the price alone – Bagan was largely depopulated of Burmese villagers a decade or so ago to make way for hotels around Bagan’s temple ruins and, some say, to cut down on contact between the Burmese and foreigners.

The drive to Mount Popa, however, just like the drive to Kbal Spean temple in the countryside around Cambodia’s Angkor Wat, gets you out into the middle of ordinary Burmese life. The road is sealed and easy driving for the most part – but either side of the road, you’ll see few cars and motorbikes and a lot of bicycles and oxen and carts. There’s few concrete houses too – many of them are built from bamboo and woven reeds.

There’s a lot of life that goes on around the road, as it’s the artery that links the local villages on the way to Mount Popa – so there are plenty of kids who like to shout “Hello!” as you whizz by in the car. You’ll be able to hear them as it will be very unlikely your taxi will have air-con, so you’ll have the window wound down for some old fashioned wind cooling… The cheery faces of the kids belie how hard it must be making a living out here – everything was brown and dusty when I passed through, although it was directly before rainy season. The trip to Mount Popa is a memorable couple of hours where you can see a little of real Burmese life.